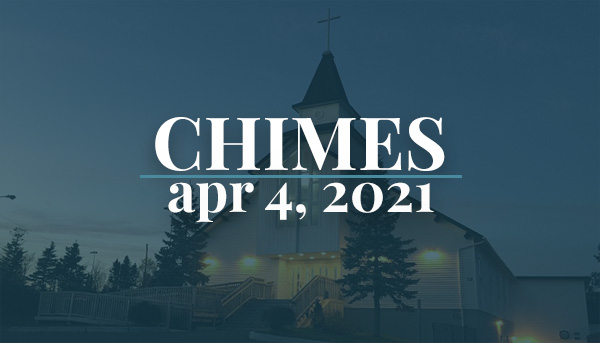 Each and every year, these words, this song echoes to the core of my very being. In the joy and the wonder of the celebration of Easter, so many throughout the world give thanks for one of the core tenets of our belief: Christ has died, Christ is risen, Christ will come again.

We journey through the acts of prayer during Holy Week, and we hear the familiar narrative. Each year our listening and experiencing of the narrative brings us new insights into the nature of the Holy One, the nature of humanity, and our own experience and learning.

Let us with thankful hearts shout Hallelujah at this time, even in the strangeness of these days, as we encounter the narrative of the resurrection amid pandemic, isolation, lockdown, and online worship.

Things may not be as we wish them to be, and yet the Holy One is a constant, providing us with hope, steadfast love, and redemption.

Have a blessed Easter Day and season, give thanks and show love in the ways you can.

I give thanks for each and every one of you, as we continue our journey together, in the days and weeks ahead.

Blessings and prayers of thanks from the vestry and wardens, from the clergy and staff of the Ascension, as we miss being with you in person, and yet we give thanks for the continued safety and love, care and concern that we share together.

Blessed Easter one and all!

Lord of life and power,
through the mighty resurrection of your Son,
you have overcome the old order of sin and death
and have made all things new in him.
May we, being dead to sin
and alive to you in Jesus Christ,
reign with him in glory,
who with you and the Holy Spirit is alive,
one God, now and for ever. AMEN

A Reading from the Book of Isaiah

On this mountain the Lord of hosts will make for all peoples a feast of rich food, a feast of well-matured wines, of rich food filled with marrow, of well-matured wines strained clear. And he will destroy on this mountain the shroud that is cast over all peoples, the sheet that is spread over all nations; he will swallow up death for ever. Then the Lord God will wipe away the tears from all faces, and the disgrace of his people he will take away from all the earth, for the Lord has spoken. It will be said on that day, Lo, this is our God; we have waited for him, so that he might save us. This is the Lord for whom we have waited; let us be glad and rejoice in his salvation. Isaiah 25:6-9

Give thanks to the Lord, for he is good;
his mercy endures for ever.

Let Israel now proclaim,
"His mercy endures for ever."

The Lord is my strength and my song,
and he has become my salvation.

There is a sound of exultation and victory|
in the tents of the righteous:

I shall not die, but live,
and declare the works of the Lord.

The Lord has punished me sorely,
but he did not hand me over to death.

Open for me the gates of righteousness;
I will enter them;  I will offer thanks to the Lord.

"This is the gate of the Lord;
he who is righteous may enter."

I will give thanks to you, for you answered me
and have become my salvation.

The same stone which the builders rejected
has become the chief cornerstone.

This is the Lord's doing,
and it is marvellous in our eyes.

On this day the Lord has acted;
we will rejoice and be glad in it.

Holy and mighty God, your Son’s triumph over sin and death has opened to us the gate of eternal life. Purify our hearts that we may follow where he has gone and share in the radiance of his glory. We ask this for the sake of our risen Lord.   PSALM 118:1-2, 14-24

A Reading from the First Letter of Paul to the Corinthians

Now I would remind you, brothers and sisters, of the good news that I proclaimed to you, which you in turn received, in which also you stand, through which also you are being saved, if you hold firmly to the message that I proclaimed to you - unless you have come to believe in vain. For I handed on to you as of first importance what I in turn had received: that Christ died for our sins in accordance with the scriptures, and that he was buried, and that he was raised on the third day in accordance with the scriptures, and that he appeared to Cephas, then to the twelve. Then he appeared to more than five hundred brothers and sisters at one time, most of whom are still alive, though some have died. Then he appeared to James, then to all the apostles. Last of all, as to one untimely born, he appeared also to me. For I am the least of the apostles, unfit to be called an apostle, because I persecuted the church of God. But by the grace of God I am what I am, and his grace toward me has not been in vain. On the contrary, I worked harder than any of them - though it was not I, but the grace of God that is with me. Whether then it was I or they, so we proclaim and so you have come to believe.   1 CORINTHIANS 15:1-11

The Holy Gospel of our Lord Jesus Christ According to John

Early on the first day of the week, while it was still dark, Mary Magdalene came to the tomb and saw that the stone had been removed from the tomb. So she ran and went to Simon Peter and the other disciple, the one whom Jesus loved, and said to them, "They have taken the Lord out of the tomb, and we do not know where they have laid him." Then Peter and the other disciple set out and went toward the tomb. The two were running together, but the other disciple outran Peter and reached the tomb first. He bent down to look in and saw the linen wrappings lying there, but he did not go in. Then Simon Peter came, following him, and went into the tomb. He saw the linen wrappings lying there, and the cloth that had been on Jesus' head, not lying with the linen wrappings but rolled up in a place by itself. Then the other disciple, who reached the tomb first, also went in, and he saw and believed; for as yet they did not understand the scripture, that he must rise from the dead. Then the disciples returned to their homes. But Mary stood weeping outside the tomb. As she wept, she bent over to look into the tomb; and she saw two angels in white, sitting where the body of Jesus had been lying, one at the head and the other at the feet. They said to her, "Woman, why are you weeping?" She said to them, "They have taken away my Lord, and I do not know where they have laid him." When she had said this, she turned around and saw Jesus standing there, but she did not know that it was Jesus. Jesus said to her, "Woman, why are you weeping? Whom are you looking for?" Supposing him to be the gardener, she said to him, "Sir, if you have carried him away, tell me where you have laid him, and I will take him away." Jesus said to her, "Mary!" She turned and said to him in Hebrew, "Rabbouni!" (which means Teacher). Jesus said to her, "Do not hold on to me, because I have not yet ascended to the Father. But go to my brothers and say to them, 'I am ascending to my Father and your Father, to my god and your God.'" Mary Magdalene went and announced to the disciples, "I have seen the Lord"; and she told them that he had said these things to her.   JOHN 20:1-18

God our strength and salvation,
receive all we offer you this day,
and grant that we who have confessed your name,
and received new life in baptism,
may live in the joy of the resurrection,
through Jesus Christ the Lord.  AMEN

God of life,
bring us to the glory of the resurrection
promised in this Easter sacrament.
We ask this in the name of Jesus Christ the risen Lord. AMEN