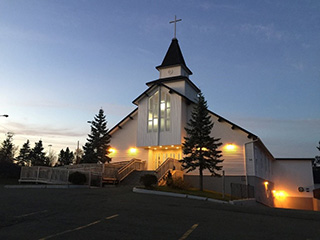 The first Anglican Service in Mount Pearl-Glendale was that of Evensong on October 12, 1952. The Service was conducted by The Rev, Canon A.B.S. Stirling, then Rector of the Parish of St. Mary the Virgin. It was held in a garage made available by the late James Billard. In December of the same year he made the garage a gift to the Diocesan Synod. This building was subsequently renovated and made fit for public worship. The first Children’s Service was conducted by the Rev. E.B. Cheeseman, Curate of St. Mary’s, at 3:00 p.m. October 19, 1952. The first Mattins, at 11:00 a.m., April 3rd, 1953 was conducted by the Rev. Vernon Cluett, also Curate of St. Mary’s. In July, 1953, the Rev. R.T. Mercer, became Curate at St. Mary’s and was assigned the duty of ministering to the rapidly growing congregation. Rev. Mr. Mercer applied himself diligently to his work and visited all church families in the area. In October 1953, Mrs. Billard donated an Altar and Mr. Gordon Parsons, Rector’s Warden, an Altar Cross in memory of his mother. Other items necessary for the divine service were added and on November 29, Canon Stirling blessed and dedicated them to the Glory of God and for the Service of His Church. On December 27, 1953 at 9:am, the Holy Communion was celebrated for the first time by the Rev. R.T. Mercer. There were thirty communicants.

First Church of the Ascension

An ever-growing congregation made it evident that a larger worthier building should be provided for the spiritual needs of the area. Preliminary plans and financial canvases were undertaken under the direction of the Rev. R.T. Mercer. The Diocesan Synod purchased a piece of land suitable for a Church site and made it available. On January 31, 1954 the first Annual Meeting was held and the Church Wardens and Select Vestry elected.

On May 20, 1955 plans for two church building were submitted to the Executive Committee of Synod for approval. One was of a conventional type and the other a building of modern design. The executive requested that a model of the modern design building also be submitted, and on June 2 it was submitted and approved and permission given to excavate and construct the basement. On August 11, the Executive Committee gave permission for construction of the Church. The New Church was opened and dedicated on June 17, 1956 by Canon J.A. Meaden, Bishop-Elect of the Diocese of the Diocese of Newfoundland. It was the first church to be consecrated by Bishop Meaden and the first Anglican Church buld in St. John’s for nearly one hundred years. It was designed by Mr. Wrener Hyman and Canon R.R. Babb. May 26, 1957 was a memorable day when the new Church of the Ascension was consecrated by the Lord Bishop of Newfoundland, the Rt, Rev. John Alfred Meaden, M.A. There were many invited guests representing Church, State and the Community in attendance, including the Lieut. Governor and Lady Outerbridge, and the Church was filled to overflowing for the Solemn and moving service of Consecration. The newly formed choir was under the direction of H. Clyde Johnston.

Parish status was granted by the Diocese of January 1, 1964 and the Rev. R.T. Mercer , who had returned as resident Priest in Mount Pearl in 1962, was inducted on February 23 as the first rector.

During the 1960’s and early 1970’s something began to happen which could not have been foreseen by those who had planned and built the new Church, and would have been unthinkable to those first worshippers in the little garage. A large number of families began to immigrate from the urban core of the city to the suburbs to build new homes and settle in subdivisions in Mount Pearl. It soon became apparent that the Church built to seat 230 could no longer accommodate the people, and a larger building would have to be constructed. In 1964 the Church land was divided by the newly constructed Smallwood Drive and 4 building lots were sold. In 1976 a committee was setup to find a preliminary plan for a new Church based on a conventional type of building of the “Anglican Tradition”. Construction of the building was started in November 1977and it was dedicated by Archbishop Robert L/ Seaborn on September 24, 1978. The newest Church of the Ascension was consecrated to the Glory of God by Bishop Martin Mate on May 12, 1983.